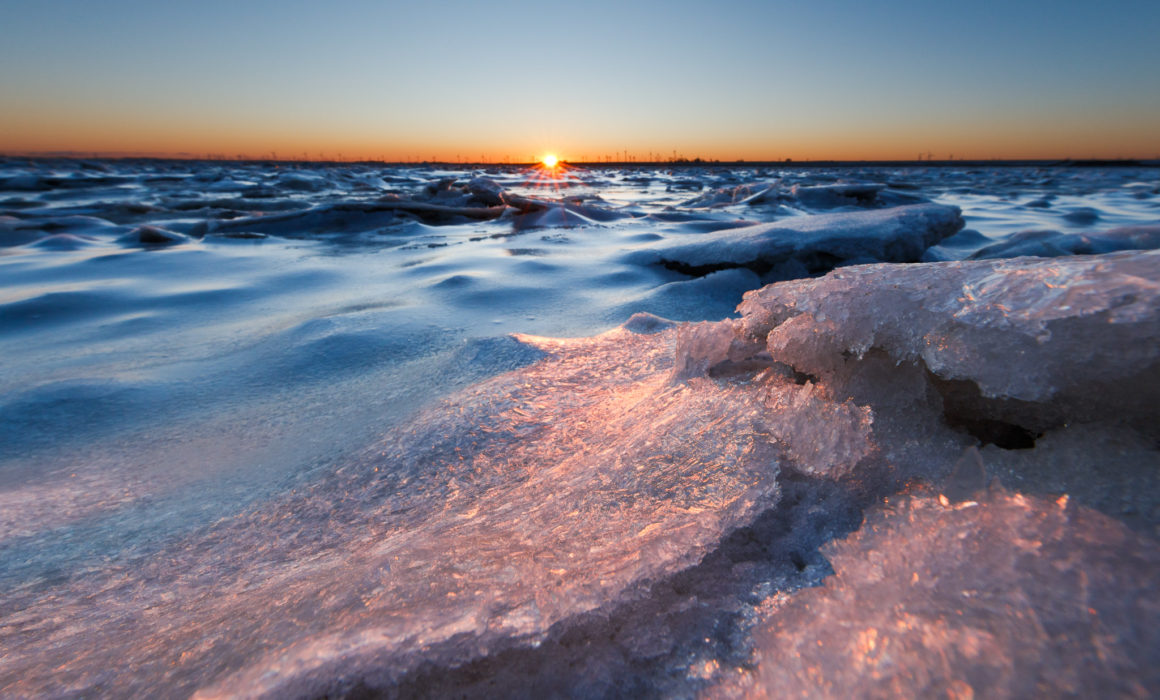 With constant temperatures below 0 °C the North Sea became partly frozen. Between Februar 12th and 14th 2021 I documented sights near Tönning, Westerhever and Nordstrandischmoor. Firstly, I saw the stunning ice drift on river Eider’s outfall at Eidersperrwerk. The early morning hours were magical, to say the least. When the sun rised above the horizon the warm colors of her rays kissed the blueish tone of the ice.

One very impressive sight was St. Peter Böhl (the southern part of St. Peter Ording) surrounded by ice in the (at least at the coast) partly frozen North Sea. Now, the stilt buildings remind me of the Antarctic research station Neumayer-Station III.

In the evening I made a walk across the mudflats at Westerheversand looking for interesting perspectives corresponding with the iconic lighthouse. All alone, I enjoyed the silence, the distant birdcalls and overwhelming beauty of the Wadden sea landscape tenderly kissed by a thin and blown away snow cover.

Fascinating forms and structures of thinnest snowdrift and ice on the mudflat:

Once you’ve walked a bit off the coast (make sure to know the tides or take a guide with you), the show belongs to the sky. An endless horizon only combined with the shape of the lighthouse makes you feel very small but also grounded and yeah: home. Only in the mountains, in deserts and at the coast I could get such an unrivaled impression of the light and color changes during sunset. For me this is a very emotional experience, which started back in 2012 during an internship on Eiderstedt.

The day ended with the most intensive colors you’ve could imagine during the nautical twilight. On the second day I wanted to picture the amount of ice at Eider’s outfall which led to this aerial image:

On the evening of Feb 13th 2021 I met up with photographer Laura Kranich at Beltringharder Koog to view the Zodiacal light above the Hallig Nordstrandischmoor. On my way to the dike I saw a rather rare scene. Young people were playing ice hockey on the frozen Lütmoorsee during sunset.

To approach Nordstrandischmoor you need to take the 3,6 km long Loren railway starting from Lütmoorsiel. Seeing those little cabines rolling into sunset was a peaceful picture.

Above: The 25 km distant Westerhever lighthouse stands out behind the dike of Eiderstedt. Below: the waxing moon crossing the Lorendamm on 18:51 CET (stacked exposure).

Now the light faded quickly. A last train drove through the twilight under the moon through the frozen mudflats into the dark.

… while the moon set behind the Neuwarft.

Finally, we saw stars and a beautiful Zodiacal light behind the Lorendamm ‘pointing’ at Pleiades.

Here’s a 360 view on the stars and milky way viewed from the Lorendamm in the frozen mudflat. If your phone supports Augmented Reality you can move around with the screen and explore the image.

While day three began with a commissoned work I took a few more distant aerial stills of the Eider at Schülpersiel in order to not disturb sea birds in the conservation area.

These beautiful days ended up with a timelapse of the tide change at Eidersperrwerk. Due to the ice drift you can recognize it vividly. Thanks for stopping by and feel free to leave a comment below. Kinds regards Marco Rank.