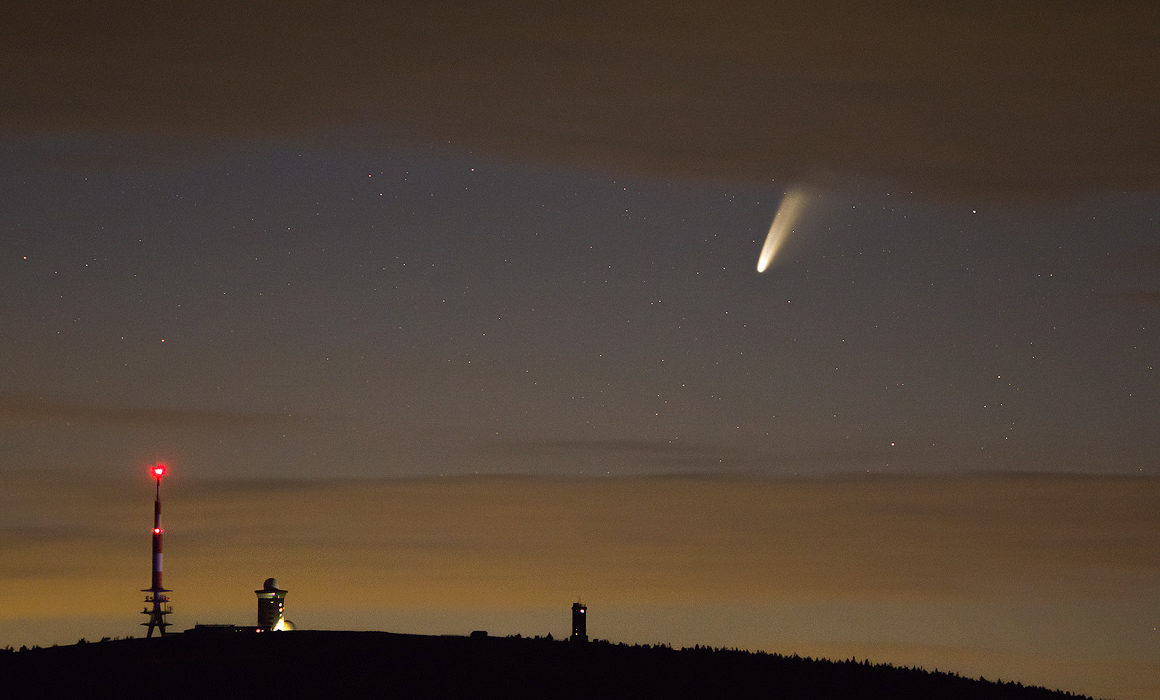 Comet Neowise above the Brocken

Comet Neowise above the Brocken

As a child I was able to observe the comet C/1995 O1 Hale-Bopp in the night sky. It was such a wonderful experience to see the tail shining clearly in the middle of the stars that I can remember the sight clearly until today. 25 years later – because I didn’t see C/2006 P1 McNaught – another comet, C/2020 F3 Neowise, appeared which would be visible with the naked eye.

After Neowise had passed the point nearest to the sun already on July 3rd, it was clearly visible in the evening sky. Soon an intense motif planning began.

Along an upcoming hiking weekend the choice fell very quickly on the Harz mountains with the Brocken peak in the foreground . Since my companion had to cancel due to illness, I set off alone on the evening of July 10th. With the help of planning apps and weather models I decided to climb the Wurmberg near Braunlage in the evening. From there the comet would pass by after midnight between 0:15 and 1:15 am at an altitude of only 2 degrees above the Brocken summit. In the second half of the night I wanted to change to the Achtermannshöhe to get a new perspective. Perfect – I thought. According to the meteogram, the initial cloud cover over the Harz mountains should sink and at my height of almost 1000m above sea level there should be clear skies. So far my thoughts.

Already on the road bright noctilucent clouds were noticeable, which however were not (no longer) visible with my arrival. On the one hand it was now quite late after 11 pm and on the other hand the Wurmberg welcomed me with clouds and unexpected icy wind. Not a good situation. I waited in a windless corner, set up one of two cameras (to be prepared) and watched the clouds passing by. Maybe it’ll still work?

Sometime around 1 am at night – at the end of my planned recording time frame – the sky above me cleared up. Finally some visibility! But the wind kept pushing clouds over the Brocken summit.

My eyes got used to the darkness. This way, I could quickly notice the luminous tail above the clouds. I started a time lapse in the hope that the clouds would sink further with decreasing wind or at least temporarily give a view of the comet.

1:20 am. The optimal time frame for the photograph was now over. The comet had passed the peak of the Brocken mountain. Even if the sky above me was starry and the wind decreased now clearly, the Brocken peak appeared wrapped in clouds.

With 15kg the weighing backpack I walked down to the parking lot, where several boars roamed the meadow not far from the car. The time window for the second motif started around 3:30 am and ended with the dawn at about 4 am. Arrived in Königskrug below the Achtermannshöhe, I entered the national park at 2:30 am and hiked the next stretch. In the middle of many dead spruces I met red deer, which checked me from a distance of only 10m. Grateful for this encounter I continued my way and reached the Achtermannshöhe in time shortly after 3 pm. As I was about to climb over the last cliffs, I almost fell over the bivouac of two hikers in deep sleep.

Like at the beginning on the Wurmberg a fresh wind blew here too. The clouds remained clearly above me and allowed hardly a view of the dawn with the comet behind. The latter should now cross the Brocken one more time. But the cloud cover remained persistent and gave only this complete view of the comet:

Slightly disappointed about the missed opportunities, I descended again with the increasing twilight. The apocalyptic view of the spruce forest, extensively killed by the bark beetle, was impressive. After initial shivers, confidence followed. The former spruces will give place and basis for life to other flora and fauna.

Back at the parking lot the sun had already risen. I drove my car a little bit aside and went to sleep. Less than an hour later the police knocked on the window to take a closer look at the guy from Jena. Afterwards I was not going to sleep anymore …

After the morning I decided to make another attempt in terms of the “Brocken-Transit” for the following night. The weather should become more pleasant (lower dew points, less wind) and the position of the comet had changed only slightly. I worked during the day and in the evening I found myself on the parking lot of the Wurmberg again. The sky was clear. After a half hour ascent I could hardly believe it: clouds came up from the west. The remnants of a single shower near Goslar came towards me at a snail’s pace. While there was no cloud to be seen all around, this one turned out to be a disaster. Because of the low displacement speed of the shower the second attempt (photographing the comet between 0:25 and 1:25 am in 5 degrees height over the Brocken) was quasi unreachable – again.

Squatting in my windless corner on the Wurmberg, I was thinking about whether I should hope for a clear sky for about 2 hours or break off along with the noticeable overtiredness.

While it slightly rained on me, I started my way back – a little disappointed. At the foot of the mountain I saw how the shower gradually released more sky above the horizon towards northwest. It shouldn’t be too long now, then the comet should come out from under the cloud – I thought. So I stopped and watched the slowly widening strip above the clearly visible Brocken peak. Again the transit’s time frame was as good as elapsed. Then it happened. First quite timidly – then very clearly – the brightly shining comet came out from under the cloud. I was happy and excited. First I built up one, soon the second camera and tried to record some interesting perspectives in the few remaining minutes. This one particularly fascinated me:

The light pollution of Bad Harzburg immersed the clouds of the scenery in a rich yellowish-orange hue. At first irritated by the colours, I found them very conciliatory at second glance. The comet, which had become almost unreachable for me during these two days, “looked down” carefully behind the altocumulus cloud on the Brocken. It was mystical.

But it was impossible to think about quitting work. It cleared up further from the west and I was able to bring together Brocken and Komet once more with the location at Königskrug / Achtermannshöhe. So again down the stairs, to the car (no wild boars today), to Königskrug, in order to see the comet directly at the parking lot at dusk at 2:30 am completely with gas and dust tail.

These are my picture compositions at various locations within walking distance:

And look! Suddenly the clouds were supportive. A longer altocumulus field was the perfect solution to connect the increasingly distant objects (Brocken and comet) as a bridge or to separate them intentionally.

I photographed until twilight had completely hidden the comet and thus heralded the new day. After a strong coffee at the car I went back to Jena.

When I saw the few time lapse snippets available, I had to smile. After all the hundreds of perfect comet photos on the internet, these covert, unfortunate images offered a completely contrary picture:

In the days that followed, I considered another, third attempt to get the shot. However, for various reasons this two-day trip was my last try.

The part of me that strives for perfection still longs for this particular composition. But another also sees the unique concatenation of circumstances that led to the pictures shown above. Much was by no means intended. I thought about giving up and the question of meaning several times. In spite of all the planning, the happy and the adverse circumstances, the permanently conducted inner dialogue with the motif remains as an explorative path to the goal. If one preserves her / his enthusiasm despite setbacks and keeps the openness to deviate spontaneously from the plan (since the motif seems to have something else in mind), completely new possibilities open up.

As a consequence, I am very grateful for these two days and look with pleasure at the numerous and, above all, technically far more sophisticated photographs of colleagues whose planned picture came true.

Feel free to let me know your story with drawbacks, challenges or your encounter with the comet. Cheers Marco